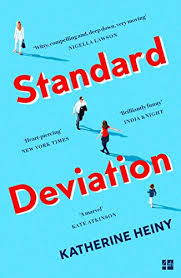 Standard Deviation was written by author Katherine Heiny, who also wrote the debut collection of short stories; Single Carefree Mellow. It was published in 2017 by Harper Collins Publishers. This book was recommended to me by the wonderful Rare Birds Book Club. They are an online book club and subscription service that send you a book every month. The club, hosted by Rachel then discuss the featured book online. I absolutely loved reading Rachel’s review and if you’re interested you can read it too by clicking here.

Audra and Graham have been married for twelve years and they couldn’t be more different. Graham is a man of culinary talent, who finds reading the stock exchange figures interesting. Audra on the other hand, is extremely social. She disarms nearly everyone she meets, though she rarely interacts with a filter and will practically invite strangers to live with them. A sudden encounter with his ex-wife, Elspeth will prompt Graham to question his choices in love.

The story is told entirely from the vantage point of Graham. It explores his growing disdain for Audra’s unyielding spontaneity in relation to his budding friendship with his ex-wife.  His is the only perspective we have to gauge the thoughts of the other characters in the story, such as his wife, a serial socialite who forms friendships as though a person can solve all one’s problems that way.

The story succeeds in creating characters that are interesting and memorable and this somewhat compensates for their utter lack of development. Each character has some quirk that makes them stand out in some way. Elspeth’s professionalism renders her clinical in almost all her affairs, their son Matthew has Asperger’s syndrome and is somewhat of a origami prodigy. Matthew’s origami club have puerile tendencies though they consist mostly of aged men. The only character that has any real development to speak of is the book’s protagonist; Graham.

I did appreciate the clever witticisms that perfectly seasoned the narrative, though it felt at times to carry a very episodic nature. Like when a scene ends and a new one begins. It was a bit like watching an American sitcom about this quirky family from Manhattan, in which the father and husband figure struggles to stay afloat in a world quite out of his depth.

I mostly had fun reading this book, but the character development was practically non-existent and judging by my past reviews, character development is crucial to a story’s success in my estimation. Also, quite an important event took place that deeply affected Graham and it was handled in an almost out-of-context fashion that was purely there for the sake of being a plot device. Also I wasn’t keen on the ending, which didn’t seem to contribute much to the story. It wasn’t memorable nor did leave a lasting impression on me.

Hey guys, thank you for reading this review! Despite my criticisms, there is a lot of fun to be had with this book, so have a read if you’re looking for something light-hearted that doesn’t take itself too seriously. For more reviews like this, please click here.