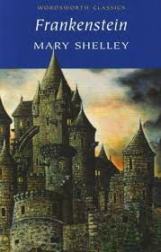 Frankenstein is the inventively gothic novel, published in 1818 by novelist Mary Shelley about a scientist who somehow discovers how to create life and so sets about the ghoulish task of creating a being from the discarded body parts of corpses.

The eponymous protagonist, Victor Frankenstein recounts his harrowing tale to the Captain of a ship bound for the Arctic region. The novel has an epistolary element which I loved as it gave the narrative an almost intimate quality; Captain Robert Walton frequently writes letters bound for his sister in England, about his perilous travels and Frankenstein’s retrospective tale.

Frankenstein has to be one of the most faultless examples of an Aristotlean hero. From his fatal flaw of audaciously playing with life to his cathartic acceptance of his wrongful actions, Frankenstein’s character is one of such poetic classicism that one could write an entire article on him alone. His development is also compelling, he undergoes such a change of character towards the end of the story by becoming wholly pious, having been the complete opposite before, albeit with a fascination of the biblical tales.

As for Victor Frankenstein’s creation, the so-called daemon, it’s characterisation was original and inventive but not believable enough for me. I feel like his character was purely symbolic, despite Shelley’s attempts to give him a sense of purpose; something that was meant to be a projection of some deeper message or theme. So even though I was moved by his cathartic end, I found myself mourning not the daemon but rather the disillusionment he represents. 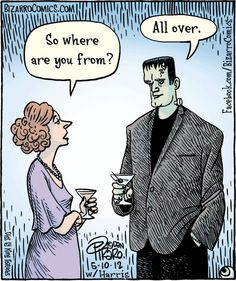 Frankenstein speaks of his science with more romanticism and lore than logic. The book completely glosses over its scientific elements, such as; just how on earth did Frankenstein create life and a being so intelligent and physically more advanced than its creator? Did he discover some rare element in the mountains of Switzerland? Did he unearth a philosopher’s stone and tap into the mysterious powers of alchemy? The book doesn’t say. Thus, the allusion to science is a device used to convey the book’s core themes; the dangers of ambition and estrangement between man and god.

I loved the gothic macabre style in which this book was written but I think the scientific aspect was a bit too overly passionate that bordered on being magical and could’ve been more believable if there was a more “logical” approach, albeit fictitious. Frankenstein was a very quick and easy read for me with just over 200 pages and a great short novel to start the month of October. I rate Frankenstein..

Thank you so much for reading this review! I hope you enjoyed it and that you will pick up this book and have a read of it yourself if you haven’t done so already. It is, after all a perfect Halloween read which might I add is nigh upon us! Do you have a favourite Halloween read? Share your comments down below!

Until next time friends! 💛📚💛

✨ TOP 10 Favourite books of the year so far! ✨ How many of these have you read or are you planning to read?
BOOK REVIEW! ☆ I just finished reading Home Fire by Kamila Shamsie, a book I was highly anticipating since it won the 2018 Women's Prize for Fiction and it did not disappoint! I would strongly recommend giving this book a read. 💯
Happy Friday! ☀️ Here's another book I bought because of the audiobook - A Pale View Of Mountains by Kazuo Ishiguro - I seriously can't be the only one who does this right?
☆Book Review☆ Hello, Just checking in to gush about the book Truth Be Told by Kia Abdullah 📚
🐍BOOK REVIEW🐍
Let's talk about back covers, because why not? 📖 Do you prefer back covers with a long summary or a short one? 📖

This site uses Akismet to reduce spam. Learn how your comment data is processed.